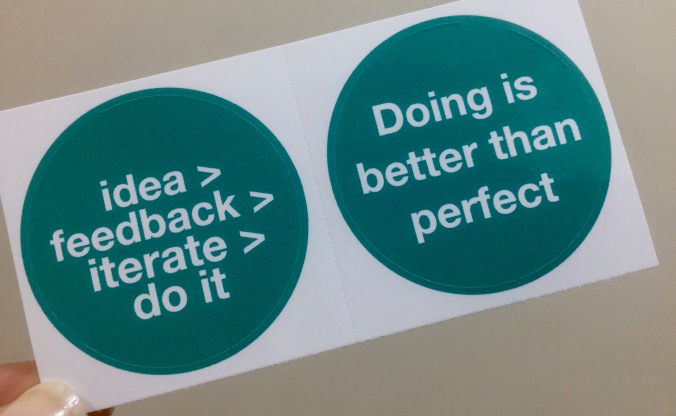 I’m going to do a new print run of Practical Action Stickers in the next few weeks.

The idea behind the project is to prompt tiny actions you can do right now.

The first set of 14 stickers was printed in December 2016. A small group of volunteers helped test them in exchange for feedback, and gave insights for future print runs. People also got in touch on Twitter with thoughtful comments on the stickers and the idea. Big thanks to all of you.

The first sets have been appearing (so far) on laptops, in offices and co-working spaces, on shared bookshelves, and in the front of diaries.

From the testing and feedback, I wanted to know which stickers people connected with the most and which ones were least liked.

The consensus was… that everyone liked different stickers. The weakest ones from all the feedback were: join a campaign group / donate to a food bank. This new print run will drop that pair and become a set of 12 stickers:

It costs to get the stickers printed and sent out. I want to try a different model of paying for print run #2. If you’d like a set, they’ll be sent out to you for free, in exchange for a donation to Liberty, a human rights organisation based in the UK. The suggested donation is £5. If you can do any more, that would be brilliant.

I’ll put in an order in the next week or two for Practical Action Stickers set #2. If you’d like one, stick your hand up on email or Twitter (no obligation at this stage, just so I have an idea of the size of order for the print run). I’ll be in touch to confirm when the sets are back from the printers, and arrange where to send them out. Then once I have donation proof,  I’ll post out a pack of the 12 Practical Action Stickers.

So that’s the plan for this second iteration of Practical Action Stickers.

Will it work? I don’t know. Let’s give it a go and see what happens.